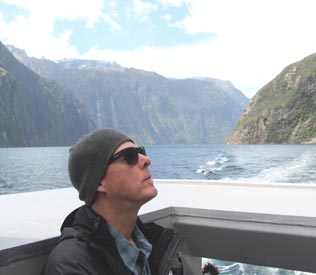 I was raised in Southern California and began drawing and painting at a young age. Inspired by sixties concert posters, album covers and Pop Art, I studied Advertising Design and Illustration at Northern Arizona University and Art Center. After college I pursued a 30+ year career in San Francisco as an advertising art director. Now I’m enjoying “advertising recovery” and a return to art-making. My studio is located in the ICB Building on the historic waterfront in Sausalito.

The two primary components of my art are autobiographical and observational. On the one hand, I source imagery from various aspects of myself and my history such as experience in the world of advertising, cross-cultural encounters and past travels, both real and imaginary. On the other, I incorporate impressions of daily life such as the chaos of urban density and din, technology’s disorienting impact on our senses and random details, graphics and things momentarily noticed in passing. My paintings often evolve spontaneously and shape-shift as I gradually work these various elements into complete compositions through layering, sanding and glazing on wood panels to reflect the depth and richness of perceived experience.